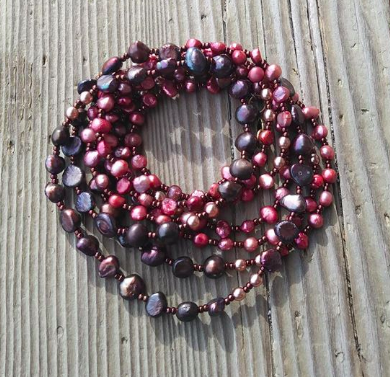 The pieces I make always have symbolic meaning to meaning.  When I moved to Alaska, I adored the beautiful Fireweed flowers, but became even more intrigued when I learned why they are called fireweed.  In many areas across America, fireweed is the first plant to grow in after an area has been wiped out by fire.

They tiny orange seed beads represent the fire, the grey freshwater pearls represent the smoke, and the pink are, of course, the fireweed. This piece can be worn as one long strand, doubled or tripled as a necklace, or as a six layer bracelet.

I gather inspiriation from a variety of places, nature, art pieces, and sometimes just from the stones and jewelry making materials themselves.

This necklace was inspired by the main stone, faceted larimar rondelles. Larimar is a stone of feminine power, allowing one to access the Divine Feminine within. It supports the heart, throat and third eye chakras. This necklace expresses simple feminity.

Glacier with Grey and Pink Clouds

This necklace was inspired by the glaciers acorss Kachemac Bay, peering through grey and pink clouds. It is made from blue kyanite blades, grey fresh water pearls, and light pink seed beads.

This necklace was inspired by Van Gogh's series of sunflower paintings. It is made from petrified coral, bronzite, yellow rutilated quartz and green agate with a brown waxed linen cord.

This is should be a prospective customer's number one call to action, e.g., requesting a quote or perusing your product catalog.